Calling upon the ancient traditions of our faiths, which recognized houses of worship as a refuge for the runaway slave, the conscientious objector, and the Central American refugee fleeing the civil wars of the 1980s, Sanctuary is once again growing among communities of faith that are standing in solidarity with immigrants and marginalized communities facing immoral and unjust deportation and discrimination policies.

We pledge to resist any policy proposals to target and deport millions of undocumented immigrants and discriminate against marginalized communities. We will open up our congregations and communities as sanctuary spaces for those targeted by hate, and work alongside our friends, families, and neighbors to ensure the dignity and human rights of all people. 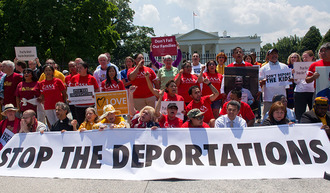