To: Sen. Chris Murphy and the U.S. Senate

Charleston to Orlando: Get guns off our streets! Now! 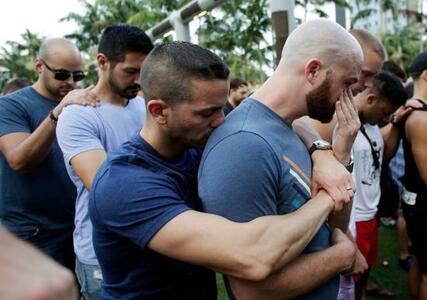 As people of faith, we thank Senator Chris Murphy for his prophetic stand against gun violence on the Senate Floor and call on U.S. Senators to honor Murphy's request for a vote on critical gun safety legislation.

It should not be this easy in America for a person with murderous intent to purchase weapons of war.

Nearly a year ago, I was on my way to Charleston with a group of faith leaders to deliver prayers from the faith community to the families of those murdered at Mother Emanuel AME church.

A year later, and I find myself again mourning the loss of innocent people, most in the prime of their life--many Latino--celebrating Latino pride.

In both tragedies, the question is the same -- how could a troubled young man so steeped in violent expressions of hate get a gun so easily?

A few years earlier, it was an attack on a Sikh Temple, where a troubled man killed 6 innocent Sikh people in Oak Creek Wisconsin. Before that, Newtown. Racism, homophobia, transphobia sexism, xenophobia, and mental illness might be killers on their own, but our gun laws have outfitted these killers for combat.

That’s why, as a Lesbian woman of faith fed up with our gun laws, I’ve launched this petition thanking Sen. Chris Murphy for being willing to be a voice of moral courage on guns and to call on his colleagues to honor his request for a vote.

The filibuster ended late last night, but as Senator Murphy stated last night, the fight will not be over until we change our gun safety laws in America.

Sen. Murphy has done exactly the right thing -- but every lawmaker right now is getting pressure from the gun lobby to back off doing anything to change our gun laws. They need to hear from us.

We need to show our Senators that people of faith don’t want Sen. Chris Murphy to stop preaching the truth about guns in America until their Senate colleagues hold a vote on gun violence prevention legislation.

Clergy and faith leaders are often put in the position of pastoring to a community after the loss of life at the hands of a firearm. Yet, a lot of these deaths could be prevented with better gun violence prevention laws. We cannot let this epidemic continue in our communities.

As Senator Cory Booker stated on the Senate Floor during the filibuster last night, “Faith without works is not enough. Prayer at this moment is not enough.”

We’ll send our petition to his staff, who reached out asking support from our community, and to other members of the U.S. Senate.