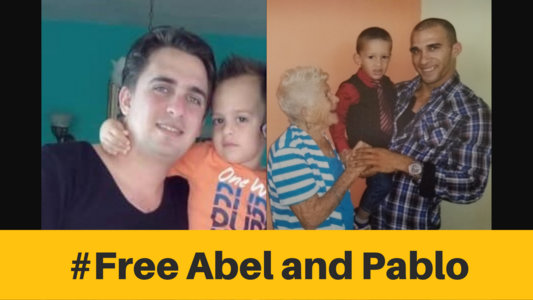 We the undersigned call on you to immediately release Abel Perez and Pablo Alvarez, on parole. Abel and Pablo are two Cuban asylum-seekers who have been detained in your custody for nearly 17 months without adequate explanation. Both Abel and Pablo fled Cuba due to fear of political persecution and have extensive families in the United States who have pledged to support them upon their release. In addition, Abel and Pablo both have offers of employment in the US and available relief under the Cuban Adjustment Act and therefore pose no flight risk. Given ICE's own standards of parole, they should have been released months ago, but the York County Field Office has been issuing blanket denials for all of their release requests. Abel and Pablo deserve to be free in accordance with DHS policy. We call on you to uphold your agency's own standards of parole and release them immediately.

Abel and Pablo have been detained by ICE for 17 months while being denied parole. The denial notices from ICE offer no rationale or true reason for denial. Both of their families in the United States are worried about them and stand ready to support them upon release. We can help get them released by drawing attention to the fact that they meet ICE's own standards for release but haven't been because of the York County Field Office's immoral practice of detaining asylum seekers. Help us hold ICE accountable and reunite Abel and Pablo with their families in the United States.