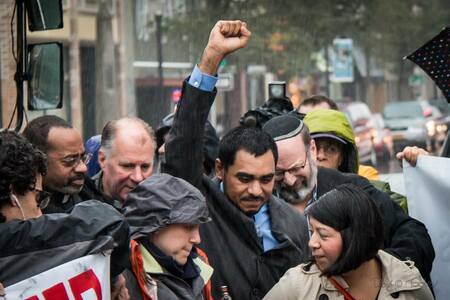 Instead of honoring his place in our community, ICE looked for a backdoor way to put him in detention and found it with your office. I urge you to re-consider the priorities of your office, and use discretion to drop the re-entry charges against Mr. Aguirre and allow him to continue to contribute to his community and remain with his family.

In September 2014 immigration agents came to the house of labor leader and Oregon immigrant rights organizer Francisco Aguirre house looking to take him into custody to deport him. When he did not open the door and asked for a warrant, they left. For the next two months, Francisco took Sanctuary in a local Portland church, while his family, advocates, and faith leaders organized a campaign to stop his deportation. But a two months into the sanctuary fight, immigration decided to seek a felony charge for “re-entry” into the United States for Francisco, in collaboration with the U.S. Marshall’s office.

ICE is pursuing Francisco despite his many contributions to Oregon, where he is raising 3 children and where he has lived for almost 20 years. Francisco has been a long-time organizer at VOZ Worker’s Rights and Education Project, where he works with low-income workers and helps them fight for fair labor rights. He has helped claim stolen wages for workers, has been involved in improving health and safety labor standards, and is a musician who signs for social justice-related causes. Francisco is also one of the pioneers of advocating for the rights of day laborers across the country working closely with the National Day Laborer Organizing Network.

Since his story became public, ICE has declared Francisco a “criminal alien” who is “considered a public safety threat and a priority for removal” in relation to two prior and isolated convictions. Twenty years ago Francisco pled ‘no contest’ to a drug-related charge, and was deported. The charge itself is questionable, and Francisco maintains his innocence. As he has explained, the only reason took a plea was due to encouragement by his public defender without knowing that ICE would take this as an admission of guilt and use it to deport him. Under today’s law, this would be considered misrepresentation and potentially grounds to re-open the case.

Francisco came into ICE’s radar when last July Francisco was pulled over and charged with a DUI. Once in court, because there was no one harmed in the incident, and because this was his first driving offense, Francisco was given the chance to enroll in a Diversion program.

Those who know Francisco well, know his dedication for social justice and his passion to advocate for the improvement of his community. Contrary to ICE’s claims, his community and his family do NOT believe that these convictions make that Francisco is a “public safety threat.” Please sign the petition to support Francisco and help stop his deportation.

Petition is successful with 2,932 signatures

Petition is successful with 2,658 signatures