To: All communities affected by the shooting at Pulse in Orlando 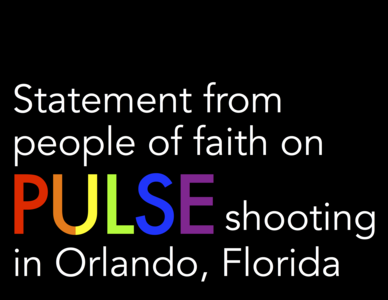 As people of faith, we decry the tragic shooting at the Pulse nightclub in Orlando, Florida, on June 12, 2016, and we lament the harm done in this act of violence. We stand in solidarity with the communities affected by the shooting.

Our faith traditions call us to love one another, to mourn those who have died, to comfort the despairing, to speak out against injustice, and to work for the transformation of our world. In this time of mixed emotions and responses, we turn to our faith for guidance, hope, and healing.

We lift up the voices of LGBTQ people and stand in solidarity with the LGBTQ community against transphobia, biphobia, and homophobia. We acknowledge that this shooting is part of a larger culture of hostility toward transgender, gender nonconforming, lesbian, gay, and bisexual people. We reject the use of religion to promote judgment or violence toward LGBTQ people.

We acknowledge that the shooting at Pulse occurred on “Latin Night” and disproportionally affected the Latinx LGBTQ community. We lift up the voices of LGBTQ Latinx people and stand in solidarity with the Latinx community against racism, the targeting of black and brown bodies, and the ongoing criminalization of Latinx lives. We disavow rhetoric that seeks to devalue and dehumanize Latinx people.

As we seek to respond to this tragedy, we celebrate the lives of those who were killed and the gifts of their sexual and gender diversity. Our faith traditions draw us closer together—not to further exclusion, fear, or enmity.

We lift up the voices of LGBTQ Muslims and stand in solidarity with the Muslim community against Islamophobia, anti-Muslim bigotry, and the scapegoating of Islam for this act of violence. We mourn and seek justice together as a community of faith.

As people of faith, we long for a world where love triumphs over hate and fear. Our faith traditions call us to seek justice. We commit to working so that all people can flourish and live whole, authentic lives.