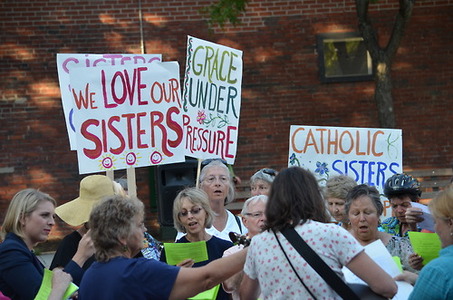 We ask you to personally intervene with Cardinal Müller and Archbishop Sartain and remove the unjust mandates imposed on the Leadership Conference of Women Religious (LCWR) over two years ago.

Cardinal Müller’s preemptive public criticism of LCWR leadership and Dr. Elizabeth Johnson, one of the most beloved and respected theologians in the world, eclipsed any opportunity for public dialogue.

This communicates that faithful Catholic female leaders are disrespected and discounted in the Roman Catholic Church.

In addition, a public apology to Dr. Elizabeth Johnson and LCWR leadership would speak volumes about the institutional Church’s intent to truly listen to women and honor their voices.

On numerous occasions you have expressed a desire to expand leadership opportunities for women. We respectfully suggest that the place to begin is to listen to faithful women who are already exercising leadership in the Roman Catholic Church.

The Leadership Conference of Women Religious (LCWR), an umbrella group representing 80% of the 57,000 nuns in the United States, remains under scrutiny from the Vatican's Congregation for the Doctrine of the Faith (CDF).

In the spring of 2012, the CDF issued a statement accusing LCWR of promoting "radical feminist themes" and "corporate dissent," causing outrage among Catholics around the globe. On April 30, 2014, the Vatican chief of doctrine, Cardinal Gerhard Müller, accused U.S. nuns of not abiding to the harsh and unjust reform agenda imposed on them by the Vatican. In addition, the document personally attacked renowned theologian Dr. Elizabeth Johnson, CSJ.

The unjust mandate forced upon the nuns, which threatens their works of justice, is a prime example of how the hierarchy in the Roman Catholic Church misuses its power to diminish the voice of women.

Catholics deeply value the prophetic witness of women religious and appreciate their commitment to social justice. The behavior that Cardinal Gerhard Müller recently exhibited toward the leaders of the LCWR and Dr. Elizabeth Johnson CSJ is deeply concerning. It is time to stop bullying Catholic women leaders.