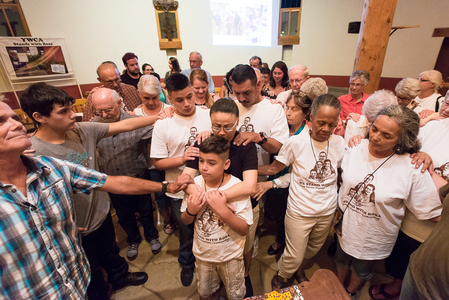 As people of faith and members of the Sanctuary movement, we had hoped the Supreme Court of the United States would keep immigrant families together by affirming the Deferred Action for Parents of Americans and Lawful Permanent Residents (DAPA) and expanded Deferred Action for Childhood Arrivals (DACA+) programs. We’re disheartened by the 4:4 split decision, but we know that our work is far from over. The case can and must be reheard and reconsidered once the Supreme Court is operating with all nine justices.

Today, we call upon President Obama to use his authority to stop the deportations – to stop tearing apart parents from children, and community members from their loved ones. We also call on the Department of Justice to immediately request a rehearing of the DAPA / DACA+ case to take place once a ninth justice is confirmed to the court.

And in November, we will go to the polls to stand up in solidarity with 11 million of our brothers and sisters who would have benefitted from DAPA and DACA+.

While we as people of faith are fighting to keep immigrant families together, the Supreme Court just denied millions of undocumented children and parents their God-given right to stay united with their families.

That’s a setback for our entire nation and puts millions of families in danger of being separated, disrupting communities and our economy. The Court’s split decision means that millions continue to live in fear of deportation. We need the Court to rehear the case. And we need common sense policies that move us forward together, united to uphold our nation’s values of integrity and family unity.

Though this decision is a moral failing of the justice and political systems, it is not the finish line. As people of faith, are standing alongside our immigrant brothers and sisters and taking action to keep families and communities together.

We are calling on the Department of Justice to immediately request a rehearing, which the Supreme Court may grant, for the DAPA / DACA+ case, Texas vs. United States. And on November 8th, we vow to go to the polls to vote with fierce love for all families and the belief that no one should ever live in fear of being torn away from their family and community.

Meanwhile, we call on President Obama to immediately stop the raids targeting Central American asylum seekers and put a moratorium on all deportations for the rest of his term and until the DAPA / DACA+ case is reheard in the Supreme Court and decided upon. With one voice, united as people of faith, we call on President Obama to use his power to stop deportations and honor the human dignity of each of our immigrant brothers and sisters.