Approve Cristina's stay of deportation to stay with her three girls 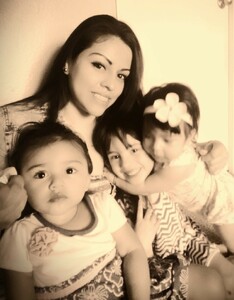 Please approve Ilse Cristina Rodriguez Sagarnaga’s (A#087678856 ) Stay of Removal application. She has three little girls, all US citizens and has lived almost her entire life in the United States. Cristina’s family and community need her here with us! Cristina does have some misdemeanor convictions in the distant past. We feel the positive factors of her children and clean record of 10 years are more compelling than these old mistakes.In addition, Cristina has the possibility of being included in her mother's application for a UVISA.

Cristina and her husband Alberto have three beautiful daughters, 9months, 21 months and 4 years old. The 30 year old mother has been fighting her deportation since 2008, when she was just 21. She is awaiting for a response on her stay of removal application.

“We're hopeful that, Immigration and Customs Enforcement will use their discretion to protect the well being of this mother and her three citizen children” declared Gabriela Flora, Program Director at the American Friends Service Committee.

Cristina’s community is requesting that the ICE Colorado Field Office approve Cristina's application of a stay of removal while she and her mother wait to see if they will qualify for a UVISA (a visa designed for victims and witnesses of crime).

Cristina has three non-violent misdemeanor convictions from when she was young and with her now ex-husband. Cristina was able to escape that abusive relationship and turn her life around. The sentencing judge in her case found she had suffered more than enough for the mistakes she made. After that, she began attending church and later got involved with community organizations. For over a decade she's had a clean record and a different life. She met and later partnered with Alberto, the father of her three children, and is a happy stay at home mom who one day hopes to go on to college. She loves nurturing her 4 year old daughter Dariana's dreams of becoming a doctor and answering her many questions about the world.

We will be emailing these petitions as well as delivering them through Cristina's lawyer to Immigration as an addendum to her stay.