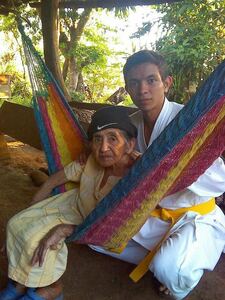 Use their discretion to release Uriel Rosales Martinez so he can receive proper medical treatment and be with his family, friends, community members and his legal counsel who are ready to support him as he fights for asylum here after fleeing violence in his country.

Uriel’s health is deteriorating in the Stewart Detention Center in Lumpkin, Georgia. The Center is unable to provide adequate health care to him, and both the stress of being away from family members and fear of a fatal return to El Salvador are complicating his condition. Recently, Uriel has had trouble urinating and has been fainting. After surgery, his urinary problems persist with gall bladder inflammation exacerbating the pain and discomfort he is in. We are extremely worried for Uriel, who is only 19 years old. Uriel has been in custody for more than 180 days and this is too long for someone to face as he has already suffered so much.

Uriel faced threats in El Salvador to join a gang. Other members of his family who refused to join gangs have been killed. The gangs are especially interested in Uriel because he is very good in karate. He has won various international competitions including, the Caribbean and Central American games.

Uriel’s claim on asylum is more than real; we will continue to appeal until his credible fear is recognized in the courts. Uriel’s brother is a leader in the Justice for Farmworkers Campaign in Long Island and New York State. Allies in the cause are allies to Uriel, as well. Now we must stand beside Uriel and his brother.