Remove the Deadline on the Equal Rights Amendment 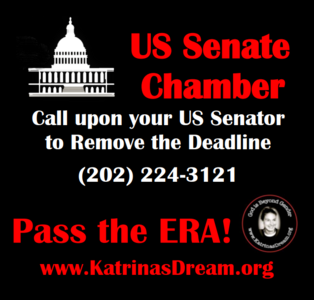 We the undersigned petition U.S. Congress to hold hearings and vote ‘Yea!’ on the federal national joint resolutions S.J. Res. 1 and H.J. Res. 17 calling for the removal of the deadline for the ratification of the Equal Rights Amendment. These resolutions would result in the adding of the following words to U.S. Constitution: "Equality of Rights under the law shall not be denied or abridged by the United States or by any state on account of sex. The Congress shall have the power to enforce, by appropriate legislation the provisions of the article."

The Equal Rights Amendment is a U.S. Constitutional amendment that will empower women, reaffirm the rights of men, and allow for the U.S. Supreme Court Justices to provide protections for those persons in the LBGT Community as all people should be treated equally under the law.

IMPORTANT UPDATE
It is time now to call upon our US Senators and urge those who were previously opposed to the ERA or had once been and changed their position to strategically pivot and co-sponsor and vote “Yea!” on S.J. Res. 1. It is time now to Pass the Equal Rights Amendment!

Much progress has been made these past few months; the US Senate Chamber is poised to ‘Remove the Deadline on the Equal Rights Amendment'. Having reached the requisite number of ratified states on January 27, 2020; and the US House having adopted H.J. Res. 17, this past March 2021, with bi-partisan support; and with advocates and activists now focusing on the US Senate, S.J. Res. 1 is gaining momentum and support.

One should note that the resolution is designated as S.J. Res. 1 in the 117th Congress, a clear indication of its importance.

Some lawsuits in motion are of relevance, particularly the VA Attorney General suit which a Notice of Appeal has been filed. Do keep in mind that come January 27, 2022, the Courts will be bogged down with a flurry of even more lawsuits.

The best approach moving forward as Linda Coberly of Winston and Strawn, LLC., stated “It would be best to have a ‘belt and suspenders’ approach: that it would be best to have both litigation and legislation, and to get Congress to act. Because if Congress acts, then you can defend that action under what’s called the political question doctrine and say that that is an issue for Congress and the courts shouldn’t get involved in it at all.”

The Petition will be delivered via email in stages due to the Covid19 best healthcare protocols.

Bishop Musonda Mwamba speaks to the urgency of passing the ERA in his welcoming address to the 63rd United Nations CSW http://www.katrinasdream.org/katrinas-story-2/lets-pass-the-era-3/2017-womens-equality-day-celebration-washington-d-c/2017-womens-equality-day-celebration-washington-d-c/2019-63rd-united-nations-commission-on-the-status-of-women/welcome-address/