To: Members of the U.S. House of Representatives

We did it! We delivered our letter to members of Congress in support of religious liberty and equality and in opposition to the First Amendment Defense Act. By raising our voices when and how we did the bill did not come to a vote. Read more here: http://www.groundswell-mvmt.org/you-stopped-congress-from-using-religion-to-discriminate/ 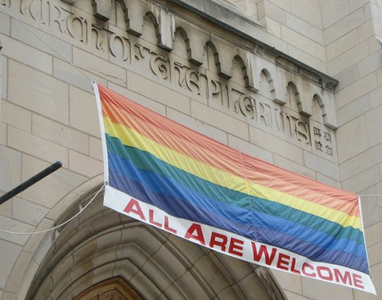 As clergy and faith leaders who serve diverse communities across the United States and are dedicated to affirming the religious freedom of every individual, we write to express our opposition to the First Amendment Defense Act (H.R. 2802).

The religious liberty upon which our nation was founded has allowed our country’s diverse religious landscape to flourish. Recently, however, what we have seen promoted as defending religious liberty too often reflects one particular religious perspective that does not at all respect that diversity of faith and belief, or the intent of our Founders. We believe that the First Amendment Defense Act does not respect the spirit of religious liberty—nor does it reflect fundamental values of treating all people with fairness and equality—and we therefore strongly oppose this legislation. Further, though people of faith are not a monolith and all are not in agreement on whether their faith sanctions LGBT relationships, we cannot in good conscience support legislation that favors one religious viewpoint over another and in the process discriminates against LGBT people, single mothers and unmarried couples.

The religious freedom of individuals and organizations, including clergy and houses of worship, who object to same-sex marriage are already protected by the First Amendment and federal law—and we, as clergy and faith leaders, continue to stand by the right of others to hold beliefs that may differ from our own while recognizing that for many of us, supporting LGBT individuals and families is a principle of our faith. Rather than protecting the First Amendment, this legislation actually undermines true religious liberty. The religious liberty on which our nation was founded guarantees us the freedom to hold any belief we choose and the right to act on our religious beliefs — but it does not allow us to harm or discriminate against others or to infringe on the religious beliefs of others.

By opening the door to unprecedented taxpayer-funded discrimination against LGBT people, single mothers and unmarried couples, this legislation does nothing to protect our rights as people of diverse faith traditions and it has the potential to do considerable harm in the name of religion. For example, were this bill to become law it would:
• allow an organization to accept federal funds to run a homeless shelter or drug treatment program but then turn away from that program LGBT people or anyone who has a sexual relationship outside of marriage;
• allow hospitals to refuse dying patients visitation from their spouse or designated support person; and
• permit a government employee to deny services they have a duty to provide, including Veterans or Social Security benefits to a surviving member of a same-sex couple.

We are also troubled that this bill is so broad it could even prevent the federal government from enforcing longstanding laws designed to combat discrimination and promote equality. For example, it would let commercial landlords violate fair housing laws by refusing housing to a single mother based on the landlord’s religious beliefs and allow businesses to violate family medical leave laws by refusing to let a gay or lesbian employee care for a sick spouse.

As people of deep faith committed to a country that supports diverse, robust, and healthy religious expression and in the spirit of equality and justice, we urge you to oppose the First Amendment Defense Act.

The petition will be shared with Members of Congress in advance of a possible vote on this legislation in the next two weeks.

Petition is successful with 3,736 signatures