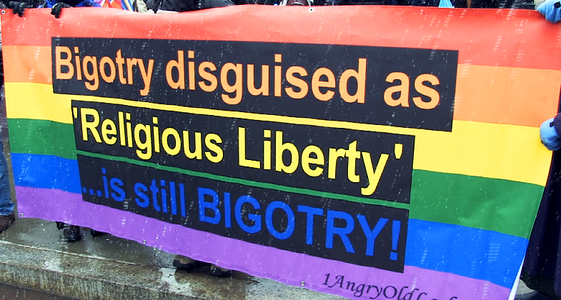 As faith and civic leaders dedicated to affirming the sacred dignity and equal worth of every person, we are grateful for your upcoming executive order ending discrimination against LGBT people in hiring by federal contractors. We urge you not to include a religious exemption in the executive order. In keeping with the principle that our government must adhere to the highest standards of ethics and fairness in its own operations, we believe that public dollars should not be used to sanction discrimination.

We recognize in others, and have ourselves heard, a faithful calling to contribute to our communities and country through public service. The imperative to seek healing and justice is one of the most widely shared values across religious traditions and our world is better because of it.

In our democratic nation, we believe that public service—especially when it is directly supported by the federal government and our tax dollars—must be aligned with the Constitutional principle that all people deserve equal treatment under the law. Requiring all federal contractors to operate according to the same set of non-discriminatory hiring practices is more than fair; it is a critical safeguard that protects all parties. If contractors were allowed to selectively follow employment or other laws according to their religious beliefs, we would quickly create an untenable morass of legal disputes.

Furthermore, if selective exemptions to the executive order were permitted, the people who would suffer most would be the people who always suffer most when discrimination is allowed: the individuals and communities that are already marginalized. Increasing the obstacles faced by those at the margins is precisely the opposite of what public service can and should do, and is precisely the opposite of the values we stand for as people of faith.

In a nation as diverse as the United States of America, it is critical that the federal government be trusted to follow—and indeed, to role-model—equitable employment practices. We believe that our mutual commitment to the common good is best served by policies that prohibit discrimination based on factors that have no relationship whatsoever to job performance. We are better and stronger as a nation when hiring decisions are made based on professional merit rather than personal identity.

An executive order that allows for religious discrimination against LGBT people contradicts the order’s fundamental purpose, as well as the belief shared by more and more Americans every day, which is that LGBT people should not be treated as second-class citizens. An exception would set a terrible precedent by denying true equality for LGBT people, while simultaneously opening a Pandora’s Box inviting other forms of discrimination.

We are a pluralistic nation—one that is among the most religiously diverse and devout in the world. Each day we continue to make progress on our journey toward “a more perfect union,” in which all God’s children are treated with fairness and dignity. Many forces help spur this progress. They include the courage of everyday people who live openly as who they truly are; the witness of faith leaders who provide a compass for religious growth; the commitment of political leaders such as yourself who help guide our nation toward a more just path; and the passage of laws and policies that ensure fair treatment for all people.

In conclusion, Mr. President, we believe that the path to national unity lies in affirming the full equality and potential of every person. In the spirit of equality, fairness, and justice, we urge you to issue an executive order that ends discrimination against LGBT people in federal contracting without exceptions.

http://www.groundswell-mvmt.org/wp-content/uploads/2014/07/Signers.pdf?showEmbed=true
*This emerging coalition of leaders includes diverse faith leaders from around the country, including seminary Presidents, NGOs heads, congregational clergy, theologians, denominational heads, and others.*

Petition is successful with 2,201 signatures

Petition is successful with 2,195 signatures