To: U.S. Governors and Congresspersons 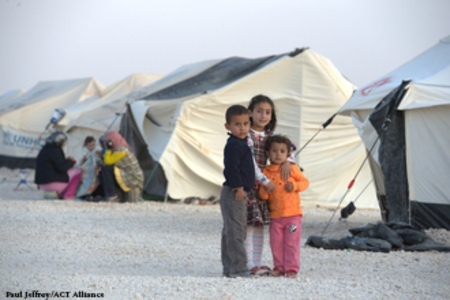 As people of faith, we are outraged by the growing number of American politicians responding to attacks by terrorist groups by opposing the resettlement in the United States of desperate refugees escaping violent conflicts.

These men, women, and children are fleeing terror; they do not bring terror with them. Public officials must hear from us, as people of faith who believe welcoming the sojourner and loving our neighbors is not a political game, but a critical and urgent need that must be addressed NOW!

As people from diverse religious traditions we are united in the core value of welcoming the sojourner and loving our neighbors. Just as the Israelites wandered through the desert to escape slavery in Egypt, and as Mary and Joseph traveled from place to place before finding a stable in the inn for the birth of Jesus, today’s refugees face similar struggles. We must stop conflating terrorism with Islam; the form of violent extremism practiced by ISIS is not part of the Muslim tradition. Islam is a religion that promotes peace, not violence. As the Qur’an reads, “Whosoever kills an innocent human being, it shall be as if he has killed all mankind, and whosoever saves the life of one, it shall be as if he had saved the life of all mankind…” Qur’an 5:32

The United States has a proud history of resettling refugees of all faiths. Keeping Syrian refugees out of this country based on their nationality or religion sends the wrong message to the rest of the world about who we are as Americans and dishonors our historic legacy of welcoming. We are a welcoming country with a religiously diverse society and our resettlement program must continue to reflect this. To not do so only feeds into ISIS’ propaganda and makes us all less safe.

To be clear, the U.S. process for admitting refugees prioritizes security concerns. The United States handpicks the refugees who resettle here, going through multiple layers of security checks and making them the most thoroughly vetted group of people to enter the United States. Security screenings are rigorous and involve the Department of Homeland Security, the FBI, the Department of Defense and multiple other intelligence agencies.

However, despite the proven safety of the U.S. resettlement program, more than half of U.S. Governors have signaled they would like to refuse entry to Syrians. It is important to recognize that states cannot unilaterally block resettlement -- governors do not have the legal authority to determine who lives in their states. Syrian refugees are legally admitted to the United States and therefore have the right to move freely throughout the country. To stop someone from entering a state due to their nationality is an attack on fundamental rights that we as Americans hold true and is against everything that we stand for as a nation of immigrants proud of our history of welcoming.

We reject the notion that our country or state can exclude certain refugees based on nationality or religion and ask our Governor and our Congresspersons to welcome all refugees including Syrians as they desperately flee violent persecution.