Daniel has been issued a stay of deportation! It means Daniel gets to stay with his son Carlos and wife Karla for another year without fear. After that, he'll apply to renew until his case is closed.

With God's grace, Daniel and his family will be together this Father's Day. But we’re also praying for the thousands of American families – just like Daniel, Carlos, and Karla – who are torn apart by our broken immigration system. 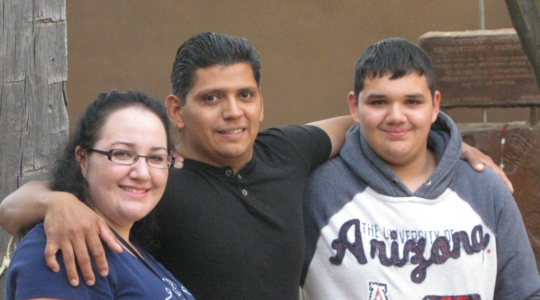 Close Daniel Neyoy Ruiz's deportation order and allow him to remain in Tucson with his wife Karla and son Carlos. Until then, my church will continue to provide sanctuary for Daniel.

In 2011, Daniel was driving to work and was pulled over by the Department of Public Safety because his car was emitting too much exhaust. Although he was never cited, Border Patrol was called and he was detained for one-month and placed in removal proceedings.

30 days ago, he was told he had to leave the United States by May 13th. On May 12th Daniel, surrounded by a large group of clergy walked into our church and entered into sanctuary. Although ICE has said that they will not actively come and apprehend him, this does not guarantee that he won’t be arbitrarily pulled over by the police, turned over to Border Patrol and immediately deported. Daniel will remain in sanctuary at our Church in Tuscon until ICE officials close his deportation case.

Now, for the first time in over 30 years, Southside Presbyterian Church has offered sanctuary to a family in our community.

WHY DANIEL?
Daniel Neyoy Ruiz came to our country 14 years ago, seeking what we all seek: a better life. During the past 14 years, he and his wife had a son, he has paid state and federal taxes since 2005, he is a music leader at his church, he is the primary financial provider for his family, and has no criminal history.

CAN WE HELP?
The good news is that what we are asking ICE to do, is something they do every day. The Obama administration has said that people like Daniel - individuals with no criminal history, with strong ties to the community, and with US Citizen children are a low priority for deportations and he has said recently that we should not be in the business of tearing apart families. While our current system needs serious reform, there is grace within our current system for people like Daniel and we are simply asking the administration to show Daniel that grace by closing his deportation order and allowing him to remain in Tucson with his wife Karla and son Carlos.

OUR VALUES
As a Pastor in Arizona, I have witnessed the way in which our broken immigration system is tearing families apart. I have heard over and over the stories of mothers afraid to go to the grocery store, fathers who want to chaperone their children’s field trips but can’t for fear that a simple traffic stop could result in deportation. As people of faith, scriptures command us to care for the widow and the orphan but sometimes we are called to act sooner and prevent the loss of parents and spouses through our immigration policies, and at Southside we believe this time is now.

Petition is successful with 1,668 signatures

Here's some of the great media coverage!

Petition is successful with 1,572 signatures

Read my editorial in the Arizona Sun Star: http://azstarnet.com/news/opinion/column/guest/the-rev-alison-harrington-neyoy-ruiuz-is-staying-with-us/article_adf5428a-473b-5749-88bc-d22b175bd963.html